Plotter for functions given as a series Σ f(x, k). The expansions in a series can be compared with different parameter ranges. For easier distinction, they can be displaced in y-direction.

For k and positive integer terms of k you may use the function fac(k) to calculate the factorial which is often used in serial expansions.

is a series expansion of the sine function. 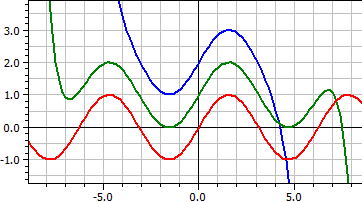