The program examines an arbitrary function. This means: The derivations are determined; the function is investigated in regard of zeros, extremes and points of inflection for a range which had been determined beforehand; the diagrams of f, f', and f" are plotted; a table of values is issued.

The function term is entered together with the range and the accuracy of examination and the angle mode.

The range of examination is the interval, in which the function is examined in regard of zeros, extremes and points of inflection. It must not be too large, as this consequently increases the step investigating the function in regard of reversal of sign.

Zeros, local maxima, local minima and the points of inflection of the function in the investigated range are issued.

Gaps in the domain of definition are not recognized by the program, simply because they often don't lie within the number domain or are skipped, due to the binary arithmetic. For this reason, extremes or points of inflection can be indicated there by mistake.

What was told about the gaps in the domain of a definition is also valid for the continuity and for the existence of a derivative of f, f' and f". Inevitably, the user himself / herself will have to make some effort. 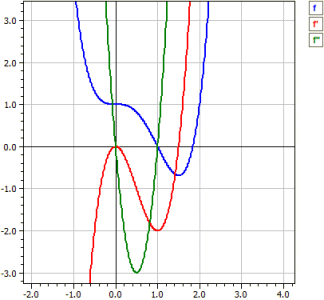 The curves of ƒ, ƒ 'and ƒ "can be switched on and off individually using the switches on the right.

Range and step of the table of values for f, f' and f" can be determined here. Predefined is the examination range of the function. Places, where one of the functions is not defined, are marked by ---.