Special lines in a triangle

If the coordinates of the three edges of a triangle are entered, the program calculates the equations of the perpendicular bisectors[1], of the side bisectors[2], of the angle bisectors[3] and of the altitudes[4]. In addition, the centers and radii of the circumcircle[5], of the incircle[6] and of the three excircles[7].

A list of check boxes can be used to select which objects should be calculated and drawn.

Example 1: incircle and excircles of a triangle 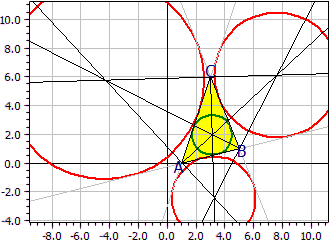 Example 2: Altitudes in an obtuse-angled triangle 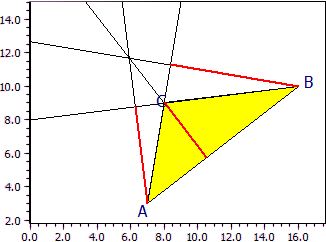 The intersection of the altitudes of an obtuse-angled triangle lies outside the triangle. The construction lines are also drawn. In order to make them more visible, the grid lines have been hidden.

Setting the graphic
Wikipedia: Incircle and excircles of a triangle